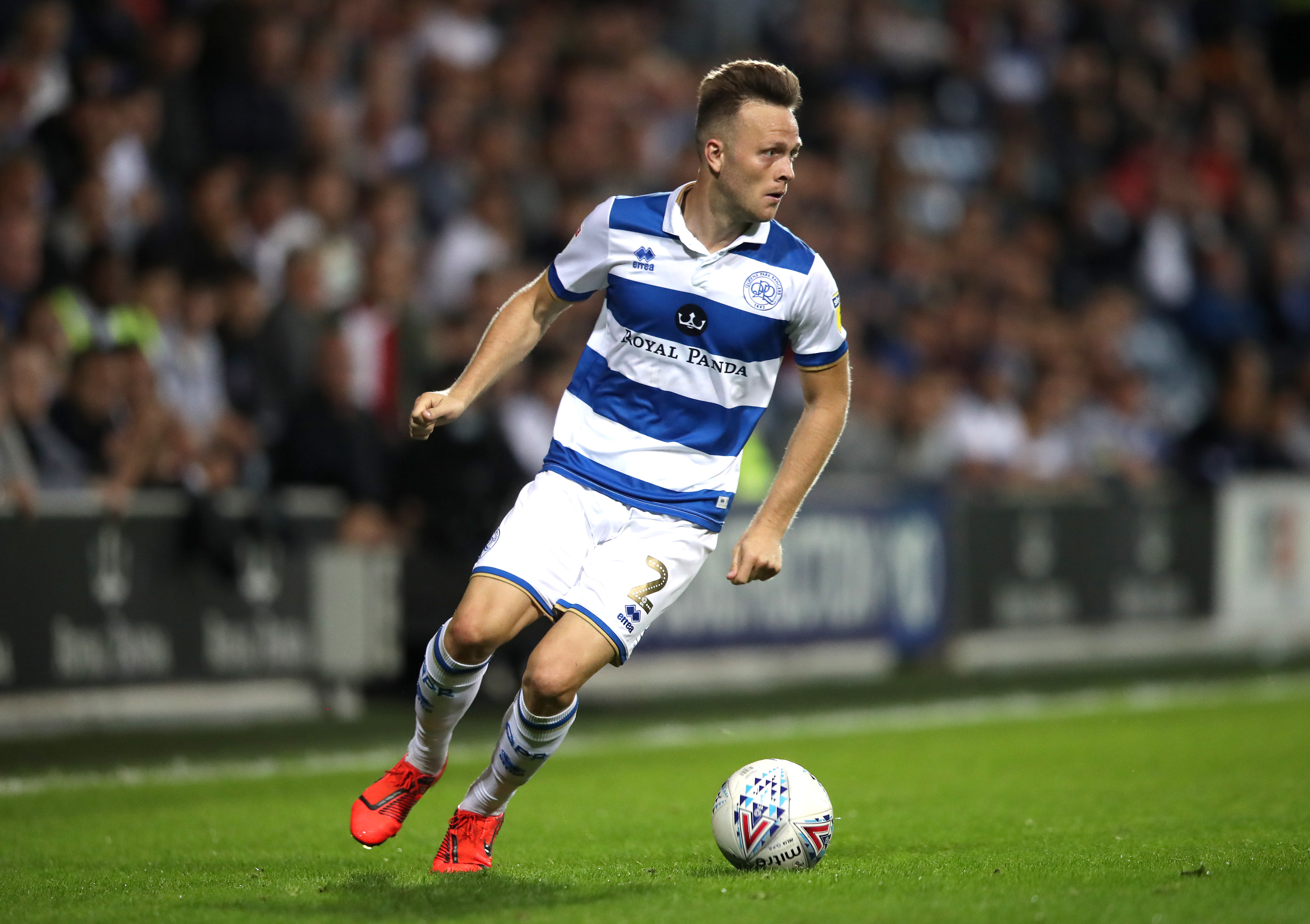 There was no segregation whatsoever outside the ground, although there was a larger police presence than I think I have seen at a ground in London. Bizarrely, the Police stood in the middle of the road at yard intervals almost all the way back to the station. There appeared to be some trouble outside White City, as several horses and a police van went up there ahead of me, but the atmosphere in the tube station was completely calm.

It seemed to me that all fans were being directed onto the Central Line at White City, although this might have been to segregate fans away from those coming back from Craven Cottage on the Hammersmith and City Line. I caught the first tube back with no problem. 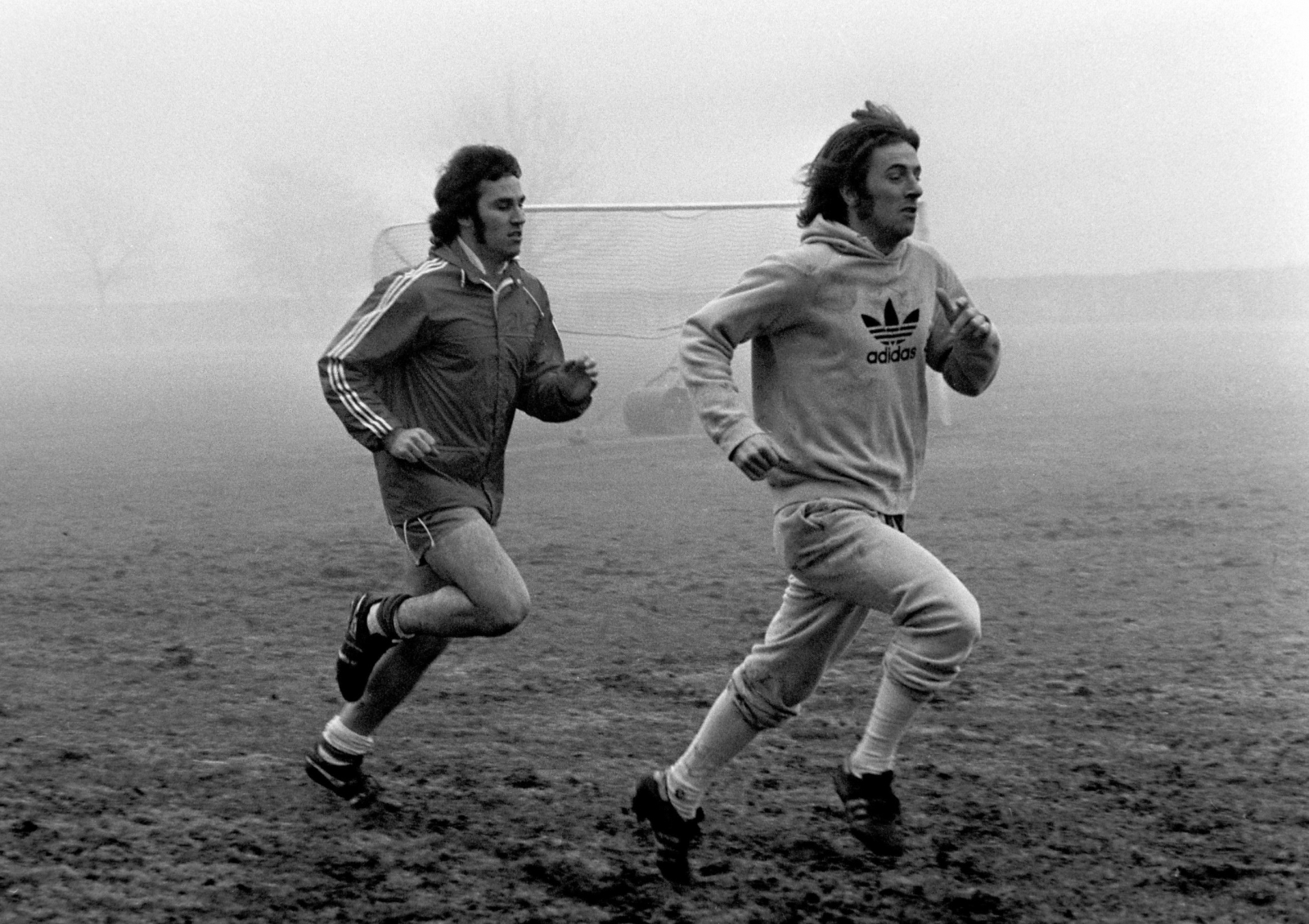 Overall, this was another great day out, aided of course by the result. I am glad to have gone, as it might be the last opportunity to go to Loftus Road to see my team play. I would be sorry to see QPR move to an identikit stadium away from their heartland, but the ground is really unsuitable for Premiership football. I was looking forward to visiting Loftus Road as I had heard the stadium was unique in that it was very compact and close to the pitch and was one of the few real 'old school' stadiums still left in top flight football. I was however a bit apprehensive as our away 'School' end tickets were sold as 'restricted view' and we didn't know exactly what that would involve.

Getting to the ground was easy as I lived nearby in Paddington so a quick journey on the Circle line to White City. The ground was a five minute walk away and was easy to find from the tube station. We didn't have time to enjoy any of the local pubs however there are quite a few. The pub nearest the ground which is almost part of the stadium I forget it's name is home fans only.

A lot of fellow away supporters headed to the Walkabout nearby. Instead we had a couple of beers inside the stadium in the away end. The home fans were very friendly and helpful and even pointed us in the right direction when we missed the turning for the School End road. The ground itself isn't anything special and pretty standard fare.

It's probably not quite good enough to be a Premiership ground. The restricted view we found was fine and was not restricted at all. The game itself was superb as an MK Dons fan. We were clinical and were definitely the better team on the day outclassing a poor QPR side and were up with over 10 minutes left. They pulled two back late on but it was too late. There must have been twice as many home supporters.

We brought over 3, and outsung them the whole game. The food and beers were standard football fare and reasonably priced. The toilets were clean however there were no sinks in the away ones we visited. The stewards were friendly and unobtrusive. Getting away from the ground was smooth and there were no real hold ups.


There was a bit of trouble between QPR fans but it seemed to be in house and the police dealt with it swiftly. All in all, it was a very enjoyable outing partly due to the result.

A friendly ground and a group of fans. The stadium is unique and you are close to the action. I would like to return but with a bit more of an atmosphere from the home supporters. I was a bit a apprehensive on visiting Loftus Road as the only tickets I could get hold of were Restricted View but from reading other reviews, I was looking forward to being close to the action at this supposedly intimate ground.

What a nightmare! I can imagine that the journey would be a lot easier on any other day. On arrival at Shepherds Bush, the ground is only a 10 minute walk away. Small, compact and very close to the match. The rest of the stadium is pretty compact. The atmosphere was a little subdued.

The game was a sell-out on both clubs websites and in the press but I noticed a few empty seats around the ground including the Albion end. I imagine this is largely due to the travel chaos in and around London on Boxing Day. The atmosphere really lifted once a few big challenges were made and West Brom scored two goals.

Loftus Road was unusually quiet even after QPR scored.

The home fans only really made any noise in the final 10mins of the game when they were pushing for an equaliser. Boxing Day football is very much a family occasion. A Great day out in the Capital and our Restricted View seats were terrific. I was looking forward to visiting Loftus Road mainly because it was my first visit to the stadium and its one of the older stadiums in the league.

I travelled with official club travel. It was a fairly simple journey down the M4 which took just over three hours, it took a while to find the ground after getting into London and it wasn't easy to spot as it is hidden between rows of housing and flats. Before the game there was no trouble with the home fans and they seemed friendly.

Although being small, I was quite impressed by the outside of Loftus Road as I was not expecting much after seeing photos of the ground, although then being situated in the upper tier we had to walk around the stadium to get to our turnstile. With Swansea being a changed team from last year, I was not sure what to expect, although the first half was even we took an early lead.

We then hit the bar twice before going in up at half time. In the second half QPR came at us, and we scored a further 4 goals to win the match The atmosphere was good from the home fans and 2, travelling Jacks at the start, but the QPR fans seemed to die down after we went up. The stewards were very friendly and had no problem with us standing. With Loftus road being an old ground the facilities were not great, but there was nothing majorly bad. After the game, well having lost some of the the QPR fans had left early.

There were some unpleasant exchanges between supporters outside the Springbok pub, as the Swansea fans made their way back to the waiting coaches and for a short while the police seemed to struggle to handle the situation. But we managed to get back okay. This was a big game for Fulham and the fact that we had sold out the away end which rarely happens with Fulham meant for a quality atmosphere.

Even though Fulham had played at Loftus Road for a season, I had never been, and having heard some good and bad things about the ground I was intrigued to find out for myself. Very easy. I went for the overground method and got off at Shepherds Bush station having changed at Clapham Junction. A short walk up Uxbridge Road, and the ground is signposted in big letters to turn on to Loftus Road. Uxbridge Road is full of restaurants and pubs so there are ample places for fans to congregate before the game.

First impressions on entering the away end were skeptical.


There seemed to be a temporary cage set up, where stewards were searching every fan as they came in, before letting them down a narrow walkway towards the turnstiles. The turnstiles were electronic barcode scanners as is in most grounds now, before you walking up a set of steps into the narrowest concourse I have ever seen.

Nowhere near enough for 1, people. Luckily I was in block Y6 nearest to entrance so scooted straight up and took my seat, second to back row of the upper tier. I had bought myself a restricted view ticket to save myself a bit of money, and having read other fans opinions on the views on the web thought I had made a mistake. However the view was brilliant. The game was always going to be a tasty and competitive for a few reasons. Firstly it was a local derby, and Fulham had beat QPR earlier in a season. We started the game on fire.

Andy Johnson having a goal disallowed within 90 seconds, before Russian marvel Pogrebnyak sent the away end into delirium after 6 minutes. Fulham bossed the first-half, with QPR also seeing new signing Diakite sent-off before the break after committing a series of stupid challenges. Fulham had their backs against the wall all second-half, and after a few scares came away unscathed and with a big win over our local rivals.

The stewards at the ground seemed very easy going with fans standing and no one was kicked out as far as I could see. Getting away from the ground was as easy and getting there. A great day out made by the atmosphere of the away support and overall result. Part of me hopes QPR do stay up this season so there is another local derby to go to next season, as it seemed to be one that every Fulham supporter on the day enjoyed. QPR and Norwich had a good rivalry last season and came up to the Premier League together so I was looking forward to a competitive encounter to round out the Christmas holidays.

From here it took just under an hour to cross town out to Shepherds Bush Central line. We would have preferred to get the train all the way, but engineering work on the Norwich to London line meant this would have taken a lot longer and involved the dreaded rail replacement bus service.

The old days of QPR and Flair | QPR REPORT MESSAGEBOARD

There were also plenty of restaurants along the south side of the huge Westfield shopping centre just north of Shepherds Bush station. There were no turnstiles as such — we were searched and had our tickets checked in a fenced off area off the street before entering the ground proper through an alleyway. Our seats were in the very back row of the upper tier, but still felt close to the action — the only downside was an obscured view of the left corner flag. When the action got underway, the first half turned out to be an untidy affair.

Obviously we took great pleasure in saying goodbye to him, almost as much as when we equalised shortly afterwards. One thing that did raise a chuckle was the half-time entertainment — instead of the more usual crossbar challenge, competitors had to make themselves dizzy by running round a post on the halfway line ten times, then try to stay upright as they sprinted to the box and tried to beat the keeper.

Unsurprisingly there was some very wobbly running involved! After the final whistle the narrow concourses and a one-way exit system meant it took a while to get out of the ground, but after that it was an easy walk back to the tube stations. Overall Loftus Road is fairly easy to get to and from, so makes a good away trip. 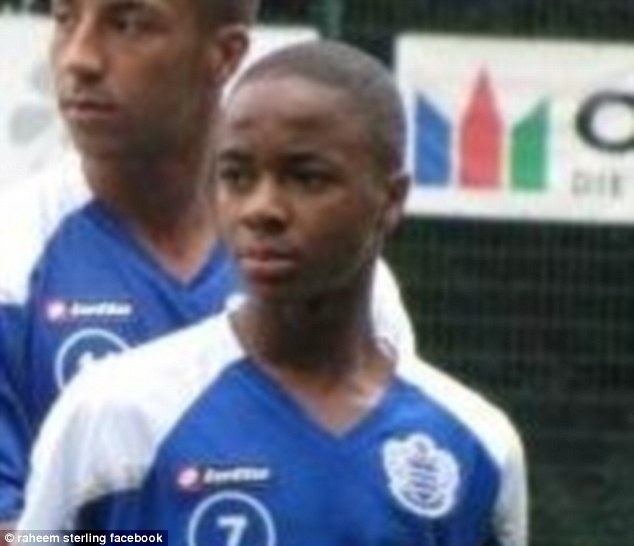 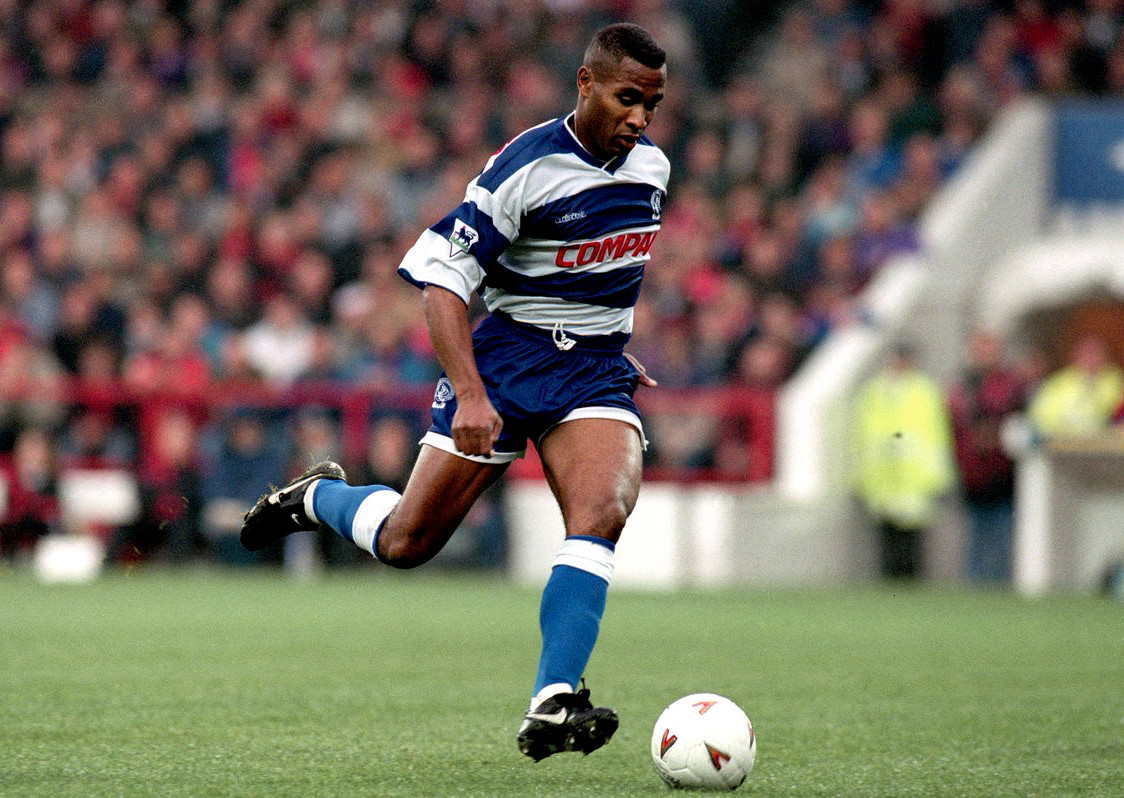 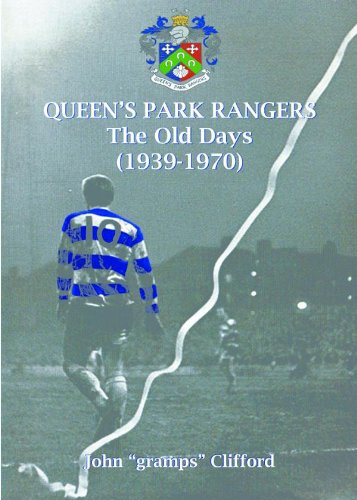 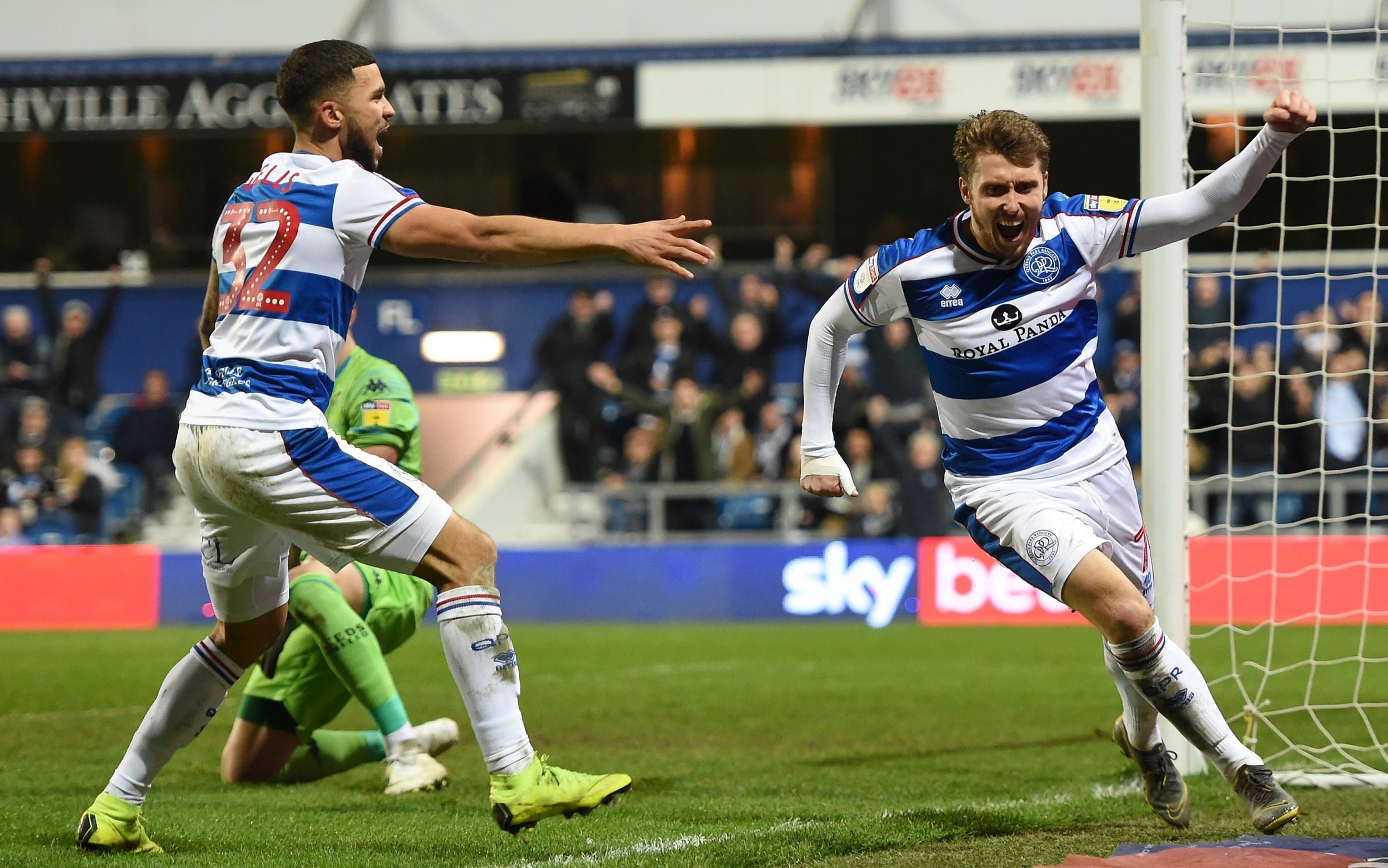